Please introduce yourself and your role at NERD.

Aurore: My name is Aurore. I’m part of the Deep Learning team. I work on research topics and technologies that we are trying to develop and which might be useful for games, and other areas. 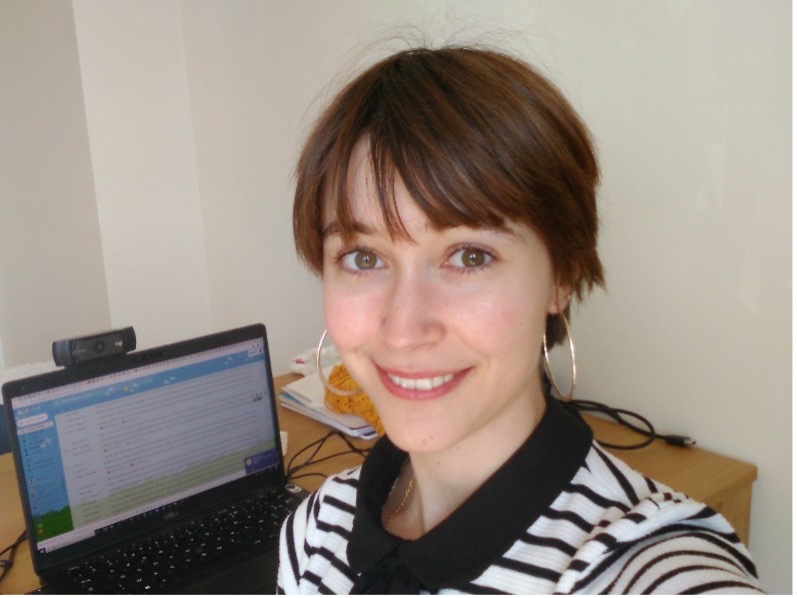 Aurore at her apartment

Mariko: Why did you apply to NERD? After joining, was it everything you expected?

Aurore: I wanted to work in an environment I could be proud of, as well as fun and interesting in terms of technology. When I found out about NERD on the internet, I thought it was an interesting opportunity… And yes, it’s as cool as I expected it to be.

Mariko: Why did you decide to get into deep learning? What fascinates you about it?

Aurore: I wasn’t planning on working on deep learning in the beginning. It’s not what I majored in during my master’s studies, but it’s also true that this area is developing really fast, and there are lots of things to do. Deep learning also requires applying knowledge, so I thought it was very interesting. I might not be a pro (yet), but I thought I could learn a lot of things. I also thought I could be a good member of the team.

Mariko: What was your master’s studies?

Aurore: It was about computer science theory, software, and security.

Mariko: It’s true that it’s not exactly deep learning, but do you enjoy working on this field now?

Aurore: Deep learning is interesting because it requires knowledge both in mathematics and computer science. Within Nintendo I have the opportunity to also work on embedded device and optimization. Which are parts of computer science that I really like.

Mariko: You said that it is an area that is developing really fast, but how do you keep up with all the latest technology?

Aurore: We exchange a lot within the team members, and we often share articles that are interesting to keep updated with the state of the art.

Mariko: So, you’re a member of the CSE2. Can you explain what you do?

Aurore: We help in creating a good environment at work. We want everyone to be happy at work, by eating crepes for example! (laughs) If there’s a problem, NERD members can come talk to us and we’ll try to solve their problem. We also want to make sure that everything is done correctly in terms of labor laws. Even if I don’t know a lot about it yet.

Mariko: Why did you apply to become a member?

Aurore: At first, I thought CSE members were cool. They contributed to making me feel good at the workplace, and I wanted to take part in that.

Mariko: What’s currently a typical day for you?

Aurore: It varies and depends on the project I am working on. Sometimes I work on research projects, so I have to read papers or documentation. I often exchange with other members of the team to have better ideas. Sometimes I work on a more concrete project, which I would code and develop to show what we want to do. It’s really different every day.

Aurore: Oh, I have lots of hobbies! I’m currently playing Animal Crossing: New Horizons… I try to draw and paint… and I also want to finish my knitting project.

Mariko: So how long have you been studying Japanese? And why did you start?

Aurore: I studied Japanese in engineering school, for three years, and it’s been more than a year now at NERD. I wanted to learn because I watch a lot of anime and read manga. I really like Japanese culture.

Mariko: What is your recent favorite anime and manga?

Aurore: Hmm… the last anime was Devilman Crybaby. It’s the last one I watched and that I liked. Manga… it’s not recent, but I like Hunter x Hunter.

Mariko: What’s your favorite word or proverb in Japanese?

Mariko: What is your favorite game? You can only pick one!

Aurore: Oh, that’s difficult… I would say NieR: Automata. I played it on the PC.

Mariko: Please show me something interesting that’s on your desk right now!

Aurore: (Stands up and brings a bonsai)

Aurore: Yes, it’s been growing quite a bit. I’ll need to prune it soon, but I’ll need to go to the bonsai shop so that I can learn how to do it properly.

Mariko: It’s difficult to take care of a bonsai, right?

Aurore: Yes. I have some books and am trying to learn. This one is an easier one. It’s a ficus. This one won’t die so easily. I got it from the bonsai shop in the 15th district.

Mariko: So, you went to our headquarters in Japan for a business trip. Was there anything interesting or memorable during your trip?

Aurore: It was a pleasure to meet the Japanese colleagues I usually meet on Zoom meetings. I also really enjoyed the radio taisou (radio calisthenics). I did it everyday!